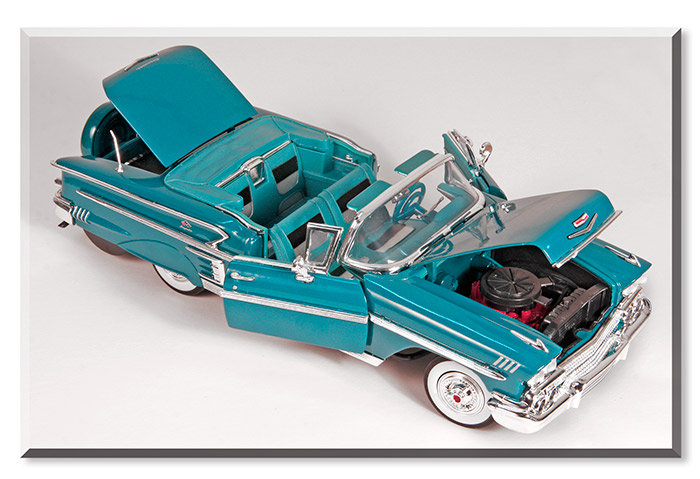 In 1958, when Ike was president and Elvis was The King, General Motors was rolling out bold and daring Chevys that took the country by storm. This is an adult collectible and not recommended for children under 14. Precision Chevy die-cast with some plastic parts. These two die-cast models have functional wheels, doors, hood and trunk, detailed interior and white wall tires with chrome rims.

The first generation Impala was the most expensive Chevy available in 1958 with a sticker price of $2,841. The Impala was basically a version of the Bel Air with the addition of a sporty trim package. The six taillights became its trademark. The body style, which lasted only one year, featured an all-new chassis and was built to be wider, longer and lower than the 1957. Quad headlamps were introduced for the first time. Original production was 55,989 convertibles and 125,480 coupes. The version represented in this model had a 280 hp Turbo-Thrust V-8 under the hood and a continental spare on the back.

The 1958 Corvette actually turned a profit for the first time since the production Corvette was introduced in 1953, which saved the line from extinction. One unique feature was its 8,000-RPM tachometer, up from 6,000 in prior years. All instrument dials, except the clock, were positioned right in front of the driver. It featured quad headlights, bumpers that were attached to the frame and secured by long brackets that provided greater protection. Paint was switched from enamel to acrylic-lacquer. The engine was a high output Fuelie V-8 under a louvered hood. Production was 9,168 from Chevy's assembly plant in St. Louis and only 1,399 were Signet Red with red interior. Base price was $3,951. Measures 9-3/4" x 4" x 3" and weighs 1 lb. 9 oz.