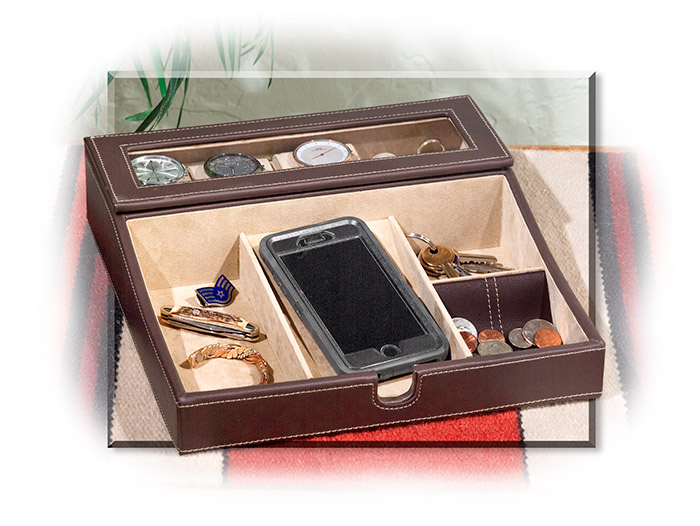 All of us need a designated place to drop our keys, jewelry, watch and other small items that we shed when we get home from work or play. This open-top valet is a perfect low profile tool for just that purpose. Place it on your nightstand, the TV cabinet or on the kitchen counter (where I tend to drop my watch, wallet, and keys). Putting everything in the same place every day saves me from searching the house when I'm ready to leave. I have enough trouble keeping up with my cell phone.

The well-thought-out design has a storage tray for your cell phone (if you can leave it in one place), a scoop coin tray and two additional open-top compartments for keys and glasses. Behind the hinged glass lid are three watch pillows and slots for rings or cufflinks, keeping them dust-free yet visible. Genuine brown leather with contrasting stitching. Tan velour lining. Measures 11" x 11-3/4" x 2-3/4" deep. Weighs 2 lbs. 2 oz.

“The Slim locking Bison Leather waist pack came with a velcro holster, clearly made to attach to velcro inside the concealed carry locking pocket.  Yet there is no velcro inside the pocket to attach it to.   The holster is of no value whatsoever, mostly a hindrance if used with this waist pack.  With no velcro inside to hold it in place, Drawing the gun out of the pocket brings the holster out too, still attached to the gun.
I bought this waist pack because it has a lock on it.  The one I bought years ago (the cowhide version) was invaluable.  My mother with Alzheimer's got hold of the pack and did her best to unzip the locked pocket, but was unable to.  Now I have grandchildren that I want to protect from accessing my gun, so I want a locking waist pack.  My old locking pack has holes through the bottom of the pocket after years of carrying my gun in it., so I thought if I bought the one made of bison leather this time it would last longer..
Changes:
Either don't include a holster, or provide velcro inside the pack to hold the holster in place.  Without corresponding velcro to attach the holster to, it is of absolutely no value whatsoever.  The pack is usable without the holster, the one I bought before didn't have a holster, but that is why the gun wore holes in the bottom, When I saw the holster, I was so pleased because that would clearly make the pack last longer.  My hopes were then dashed when I realized there was no way to attach the holster.  I seriously considered returning the waist pack, but now rather than being pleased with my replacement, I am disappointed.  So my rating is probably unfair.  Had you not included the holster, I would have rated it a 10. Rating: 8/10 ”

“Can't say enough good about those [European] nail clippers. I've had a pair in my pocket for years. Always handy, never let me down. ”