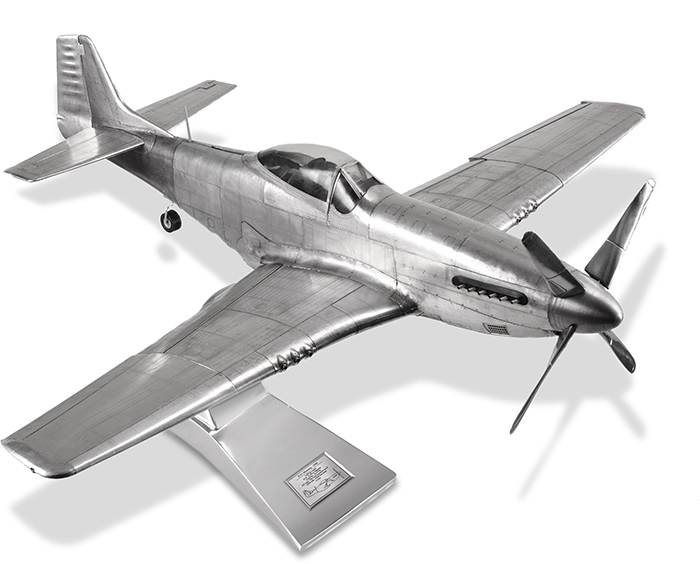 Approached by the British Purchasing Commission, North American Aviation rolled out the prototype fighter 102 days after the contract was signed. Its first flight was on October 26, 1940. The first U.S.-built single seat fighter in action after the fall of France on June 14, 1940, it successfully engaged every airborne opponent from early Junkers to the Messerschmitt.  Fast, powerful and maneuverable with 75-gallon tanks under each wing, its ability to fly 6-hour missions was unheard of at the time.

A solution to the need for an effective bomber escort, it could accompany bombers from England to Germany and back. By 1944, the new commander of 8th Air Force, Major General James Doolittle ordered many fighter pilots to stop flying formation with the bombers and instead attack the Luftwaffe wherever it could be found in order to achieve air supremacy. Used by Allied forces not only in the European theater, but also in North African, and the Mediterranean, Italian and Pacific theaters.  Mustang pilots claimed to have destroyed 4,950 enemy aircraft.  In 1944 the Truman Senate War Investigating Committee gave the Mustang its highest rating as "the most aerodynamically perfect pursuit plane in existence."

By the time it was retired from military service in 1984, more than 15,000 had been manufactured and many were sold as surplus after the war to former wartime fliers, while others were modified for air racing.

This impressive 1:15 scale model of the P-51 Mustang is appropriately made of recycled airplane aluminum. It features a fully detailed cockpit with sliding cockpit cover, retractable main wheels and a unique historical plaque with the plane's stats. Mounted on a polished aluminum base, it is the perfect gift for the aviation or history buff.  Measures 29-1/2" x 10" with a 26" wingspan. Weighs 5 lbs. 5 oz.  Stand assembly required.